SportsAid’s plans for a spectacular SportsBall in London on November 5 received a welcome boost today after it was confirmed that Zhong An Holdings will be a top-tier ‘Presenting Partner’ of the prestigious charity event.

The SportsBall regularly attracts many of British sport’s biggest names including, in recent years, Bradley Wiggins, Tanni Grey-Thompson, Tom Daley, Ben Ainslie and Sarah Storey. It also celebrates, through the charity’s much-anticipated One-to-Watch award, the achievements of the young athletes SportsAid is supporting today. In 2013 the award was presented by Her Royal Highness The Duchess of Cambridge, SportsAid’s patron, to Rio hopeful Amber Hill.

SportsAid’s chief executive Tim Lawler welcomed the news, saying, “SportsAid celebrates its 40thanniversary in 2016 so we are delighted that Zhong An Holdings have joined us as a new sponsor this year. It promises to be a fantastic evening and we look forward to welcoming their guests and colleagues into the SportsAid team at the London Hilton on the fifth of November.”

Madame Mi Na, chairman of Zhong An Holdings Limited, said, "We look forward to building on international sporting and cultural ties between China and the UK. We are extremely pleased and excited to support and forge a strong, long-term relationship with SportsAid, a charity that inspires generations of young people, whilst providing backing to future Olympians and Paralympians."

Today’s announcement means Zhong An Holdings joins Eversheds, a long-standing supporter of SportsAid, as co-sponsor of the SportsBall 2015, which celebrates its 39th edition this year.

The SportsBall 2015 kicks off at 7pm on Thursday, November 5 at the London Hilton on Park Lane. Tickets for Gold and Black tables have now sold out but the last remaining Red tables are still available. Book today at sportsball.org.uk.

Zhong An Holdings Limited, part of the China based Zhong An Group, is a specialist business development company and trading house, established in 2012, with offices in China and Hong Kong, and representation located in the United Kingdom.

The company’s focus is to undertake China centric trade internationally, together with creating partnerships, transacting business or fulfilling contracts with governments, organisations and companies who are already directly engaged in China.

The company works with organisations or brands who seek to develop business ties, market entry or trade within China, to maintain and expand their current position within China, or attract capital from local and international capital markets for ventures in China or globally.

Zhong An Holdings Limited also operates a sports, marketing and media commercial platform, with a remit to become a leading brand name within the rapidly developing domestic sports market in China, whilst supporting cultural ties and elite sport training.

The company is committed to entering into projects that encourage young people to take up sport and fitness as part of their daily activities.

​Olympians Leon Taylor and Mark Hunter took up their swords in London last night to mark the launch of SportsAid's SportsBall 2015 which they described as a 'unique' and 'very special' event in the British sporting calendar.

​Eversheds has confirmed another two years of sponsorship for SportsAid’s SportsBall as a top-tier ‘Presenting Partner’ of the prestigious charity event which supports the next generation of British athletes. 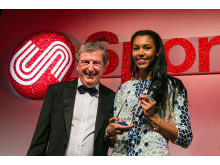