SportsAid’s annual athlete survey, now in its eighth year, has given its most detailed insight yet into where you are likely to find the next generation of British sporting champions and what drives them to train as hard as they do from such a young age.

The 650 athletes surveyed have an average age of 18, compete in 60 sports (which are predominantly Olympic and Paralympic disciplines) and have been identified by these sports as the country’s brightest prospects. Most of the athletes are already targeting major international competitions such as the junior European or world championships. For disabled athletes the next big step will be the Rio Paralympics in 2016 while for non-disabled athletes – who are typically younger when they receive SportsAid’s support – it will be the Tokyo Olympics in 2020.

The talent hotbeds are currently London, the Home Counties, Devon and West Yorkshire. A full three-quarters of the athletes credited a family member, coach or another athlete as the reason they took up their sport while 100% credited SportsAid as being helpful or even essential to their progress.

Similarly, other research carried out in 2014 (SportsAid NGB Survey) indicated that 100% of the athletes’ sports would not be able to replace the funding that SportsAid provides if it was not available.

Underlining the value of this support, one of the athletes wrote, “SportsAid has really helped my performance when it matters most.” Another wrote, “Without SportsAid I do not believe I would be at the point I am now, so for that, I am very grateful.”

In a year which saw the UK host another major multi-sports event at the Glasgow 2014 Commonwealth Games, there was near universal agreement (94%) that the Games are an important part of an athlete’s progression. At the Games, more than 450 SportsAid athletes competed for the Home Nations’ and Islands’ teams with more than half of them winning medals.

Just two years after London hosted the 2012 Olympic and Paralympic Games, this year’s survey provided further evidence of its impact on the next generation with almost a fifth of disabled athletes saying London 2012 was the very reason they took up their sport. Non-disabled athletes were much less likely to credit the Games for this but it is possible that this will change in years to come because they typically get into their sport at a younger age (9.6 years compared to 16.5 years) so are not yet known to the charity.

The athletes’ ambitions typically centre on competing and winning medals internationally but here disabled athletes appear to place less emphasis on becoming professional sportsmen and women and more on inspiring others to take up sport. Across the board, financial pressure was again cited as a major challenge – regardless of background – with annual costs remaining around the £6,000 mark. Almost all of the athletes (98%) said their costs are as high or higher than last year, and the majority (60%) said they receive no other external financial sport beyond SportsAid. More than half said their parents were a major source of income, highlighting the fundamental role that families play.

"Coming from a family who have suffered many financial problems over the past four years, having SportsAid’s support this year brought a lot of financial relief both for me and my parents,” wrote one of the athletes. Another wrote, “It’s normal for your parents to be supportive, but when you get support from SportsAid it reinforces the belief that you are good enough to succeed at the highest level.”

Remarkably, a typical SportsAid athlete already spends more than 15 hours a week in training sessions alone and travels, on average, more than 150 miles a week to get to them. Over a year, that is equivalent to travelling from London to Bali – almost 8,000 miles. Some, such as those competing in triathlon, travel almost as far during the training sessions themselves: running, cycling and swimming the distance from London to Chesterfield – more than 130 miles – every week. It is worth remembering that all this is done at a time when most SportsAid athletes are still at school or college, illustrating why there are such enormous demands on their time and finances.

Helping to relieve this financial pressure was the number one benefit of SportsAid’s support according to more than 90% of the athletes surveyed, followed by the charity’s impact on their progression and ability to train and compete more. The least expensive sports to pursue were shown to be volleyball and goalball while the most expensive are disability snowsport and tennis – each with annual costs of more than £20,000 a year. Beyond financial considerations, the charity’s support was also seen as a significant motivating factor for more than half of the athletes surveyed.

“The SportsAid athlete survey is recognised as providing the most insightful and thorough data on the habits and challenges facing the nation’s next generation of sporting talent,” said Tim Lawler, SportsAid’s chief executive. “What is the survey telling us? It’s that funding remains a major barrier and that support from SportsAid directly helps – and if SportsAid didn’t provide this help, who would? The NGBs can’t provide it. So, we owe it to this next generation to continue to provide support and recognition. It matters and it makes a difference.” 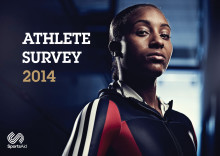 SportsAid’s annual athlete survey, now in its eighth year, has given its most detailed insight yet into where you are likely to find the next generation of British sporting champions and what drives them to train as hard as they do from such a young age.