To build on Team GB's success in Sochi SportsAid has today announced £30,000 of support over the next three years for aspiring skeleton and bobsleigh athletes who hope to compete at a future Olympic Games.

The charity is now looking for partners to match-fund this commitment to ensure more support can be given to the country's best young athletes in these sports.

Former Olympic skeleton champion Amy Williams welcomed the news saying, "This will make a huge difference to these athletes. It would be great if you felt that your company or business would be able to team up with SportsAid and match what the charity has given. The next generation are under huge financial pressure and to realise the potential that Sochi showed us, funding like this is vital."

The first twenty athletes to benefit from today's announcement are:

"British Bobsleigh and British Skeleton tell us that around 20 of their young athletes need SportsAid's help each year," explained SportsAid's Chief Executive Tim Lawler. "SportsAid has committed to support them but we need more help to ensure the next generation can achieve their ambitions."

As a former Talented Athlete Scholarship Scheme athlete, Amy benefited from SportsAid's support herself just four years before she won a gold medal at the Vancouver Olympics in 2010. She added, "SportsAid and TASS have helped so many athletes and for me, at that stage of my career, it was a huge boost. It confirms that you are on the right track and that somebody outside of your circle believes in you, and that’s something you never forget."

If you are interested in supporting aspiring skeleton and bobsleigh athletes with SportsAid contact Graham Dandy at the charity on 020 7273 1977 or email graham@sportsaid.org.uk.

Jor'dan McIntosh from Derby is one of the athletes who will benefit from today's announcement (copyright SportsAid).

'I will be next' (SportsAid film) 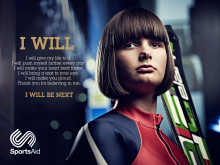 Forty-two SportsAid athletes get the chance to meet Sir Chris Hoy at a training and mentoring workshop. Olympic silver medallist Leon Taylor and Paralympic sprinter Sally Brown also on hand to give expert support to the next generation.