SportsAid has today announced the names of the three finalists for its prestigious One-to-Watch Award, each of whom will join the charity at its SportsBall in London on November 27 where the award will be.

The finalists are Abigail Stones (taekwondo), 15 from Liverpool, Maria Lyle (disability athletics), 14 from Dunbar in East Lothian, and Morgan Lake (athletics), 17 from Bagshot in Surrey.

Abigail Stones has received financial support from SportsAid in 2012 and 2014. This year she won a gold medal at the Junior World Taekwondo Championships and a bronze medal at the Youth Olympic Games. She was also SportsAid’s athlete of the month in April.

Abigail said, "I feel so excited to be shortlisted for this award ahead of 1,300 great athletes. It is a great honour for me and both my club and GB coaches who have helped me achieve so much this year. In my sport there is little to no financial support so I have to rely on my parents to fund me but with the help of SportsAid the funding they provided it helped me to become Great Britain's first junior female taekwondo world champion in the last 16 years. The money I received helped fund my training and went towards the cost of the trip to the championships for which I am so grateful."

Maria Lyle has received financial support from SportsAid in 2013 and 2014 from Bank of Scotland Local Heroes, this year she broke several senior world records and became the senior IPC European champion in 100m and 200m (T35) in 2014.

Maria said, "I’m really pleased that people have noticed my potential and it's amazing to think I was chosen over 1,300 great athletes. The money I have received from SportsAid through the Bank of Scotland Local Heroes programme has really helped me this season. I live in Scotland and my coach lives in Merseyside so I have to travel a lot. This summer, I was able to spend time in my school holidays with him to prepare for the IPC European Championships which were being held in August. The money I received helped me do this and it was definitely worthwhile as I returned home as a double European champion."

Morgan Lake has received financial support from SportsAid in 2013 and 2014 from the Jaguar Academy of Sport, this year she won two gold medals at the IAAF Junior World Championships, one in high jump and the other in heptathlon. She also holds the British junior record in the former and the world U18 record in the latter.

Morgan said, “It is an absolute honour to have made the shortlist for this award. Out of the 1,300 athletes who could have been shortlisted I am so grateful to be named, especially among the final 10. This prestigious award is a great way to acknowledge the success of athletes supported by SportsAid. The money from SportsAid has helped a lot this year, and I have been able to put it towards increasing travel costs, medical support and equipment such as a shot putt. The money has helped a lot and has meant that I can focus on just the sport without other worries."

To find out who wins SportsAid’s One-to-Watch Award, join the charity at the SportsBall on November 27. 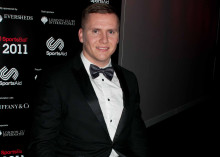 SportsAid's One-to-Watch Award was last year presented by the Duchess of Cambridge to skeet shooter Amber Hill. Find out who made the shortlist this year.