Also joining SportsAid for this charity event – which is raising money for the next generation of British athletes – are world champions Richard Hounslow, Shelley Rudman, Derek Redmond and Gail Emms.

Speaking about his support for the event Sir Steve Redgrave said, “To have a global superstar like Sir Elton John backing the next generation is incredible.

“It will have a huge impact,” he added. “I know from personal experience what a difference support from SportsAid can make.”

Sir Elton John will perform live in the gardens of the five-star Stoke Park country club, spa and hotel on June 28 in Buckinghamshire. Tickets start at £75 (subject to availability) and are available from Ticketmaster. All the proceeds go to SportsAid (charity 1111612) with the aim of creating a £500,000 fund to help talented disabled and non-disabled athletes throughout the UK to meet the costs associated with their sport.

“I am so excited to be part of this landmark event for SportsAid and to be helping the young, aspiring sports stars of the future,” said Sir Elton John.

“I thought the London 2012 Olympic and Paralympic Games were incredible and I was very moved by the ‘inspire a generation’ motto that accompanied it. The Games really brought home to me the sacrifices and enormous challenges that young people face to reach the highest level in sport – and from such an early age too. Their ambition and courage is a huge source of inspiration to me and I know we can make a big difference to their lives by setting up this new fund.” 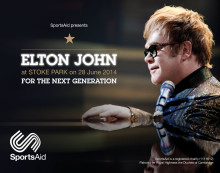 One lucky Elton John fan could win two free tickets to see him play live at a concert for SportsAid on June 28 just by liking the charity's Facebook page.