Olympic rower Moe Sbihi admits the pressure will be on as he lines up against the world’s best crews in the world championship final on Sunday.

Moe is one of five SportsAid alumni in Great Britain's men’s eight who are looking to secure a spot at next summer’s Paralympic Games in Rio. Before the last Olympics the top seven world championship boats went through but this year, it will be just the top five who qualify.

"It's going to create a cut-throat environment,” Moe explained to SportsAid at the charity’s Sports Quiz earlier this summer.

“Everybody around the world has noticed, so everybody is putting their top guys in the eights because they want to send their biggest team to Rio. Ultimately we want to be there to win and you can't win if you're not qualified.”

So far, everything seems to be going to plan. Moe and his teammates won their heat on Monday to qualify fastest for the final, where their biggest rivals are likely to be Germany, who also won their heat. New Zealand, the Netherlands, Russia and Italy take up the remaining lanes on either side.

Moe is upbeat about their chances. “It's an exciting year,” he adds. “And before you know it, hopefully we'll be on the start line of the Olympics.”

Asked about the support he got from SportsAid when he was younger, Moe says, "I was very lucky to get a SportsAid award when I was coming through and the way it works, not everybody can get funding or be able to afford the sport without it, so to get that really does help and goes a long way.

“It allows you to focus on your training, it allows you to focus on your school work, because sport is not cheap, and it's not just rowing, that's sport across the board. If you have aims to become an Olympic medallist your family are already making big sacrifices, so this is where SportsAid comes in. It boosts your confidence, your ability to train and just helps you all round.

"In rowing it's incredibly hard to get sponsorship, even at the senior level, and you can only imagine what that's like as a junior.”

Follow all the action at the 2015 World Rowing Championships here. 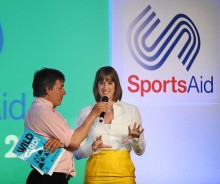 Join the Olympic stars at next month's Sports Quiz

Olympic athletes Karen Pickering, Mohamed Sbihi and Steve Williams have all confirmed they will be at next month's Sports Quiz at Lord's Cricket Ground to support SportsAid. Tickets for this popular charity event are on sale now.