If you are looking for an example of the Paralympic legacy in action you would have to go a long way to find a better one than Dan Roper. Inspired by watching goalball players like David and Adam Knott competing at London 2012, on February 5 he was playing alongside them in the final of the men’s IBSA C European Championships against Russia where he scored the golden goal to give Great Britain the title.

"It is the proudest moment of my life," says the 24-year-old from Hereford who was talent spotted by Goalball UK in 2013. "The golden goal was amazing because the whole team ran on court and congratulated everyone. It was a massive team effort and moral that made it possible to win."

There was no doubt a sense of relief too. In 2013, just over a year after taking on the world’s best at London 2012, the GB goalball team were back on home soil at the European championships in Worcester where they lost the bronze medal match to Portugal, leaving Russia to go on and win gold. Dan was not a member of that team but for his teammates who were, the 2015 championships in Malmo set up the perfect rematch, with GB back in front of Portugal in the semi-final.

“It was a very tense game,” Dan explains. “Although we were in the lead most of the game they stayed with us in the first half. When we were two goals clear in the second half we decided to slow the game down by taking slow shots. If they managed to score past us our plan would have backfired but we were confident in the defence. We played a good game and as there were only a few seconds left we were able to count down the last few seconds which would see us through to the next European championships.”

With promotion to the IBSA B European Championships secured – the team’s first step on the long road to the Tokyo 2020 Paralympics – Dan says they were “ready for anything” going into the final against Russia. But having already lost to them in the group stage, the win only came after another tactical fight through a tight game.

“After a very strong first half from us and Russia we were one goal down but there was a good feeling in the air for us and we were still relaxed. We evened the scores and played a controlled game and the full-time score was 5-5,” he adds.

Going into extra time, Dan’s teammates again started strongly by executing a fine series of plays to set up his title-clinching shot which came just half way through the first half.

“We kept hitting them from different places but they defended well,” Dan explains. “In the end, after Adam threw a lovely bounce shot which they couldn't control, it meant they had to throw the ball out. So I had a full ten seconds to take a shot. I moved around the centre to get a shot in the far corner. It hits the post and is in the goal! With the whistle we all ran into a circle hugging and shouting with excitement.”

It was a huge moment for the British team which can be seen on Goalball UK’s Facebook page, where Francesco De Meo‎ has posted a clip of the game’s final seconds.

The chance to play alongside players like London 2012 Paralympians David and Adam Knott, as well as fellow GB teammates David Butler and Filmon Eyassu, has been a huge privilege for someone so new to the team, especially, as Dan says, “because we often compete in the league”. But the signs are there that they are using this competitive edge to build a great partnership between themselves. Dan explains that when it comes to the national side they play “as a unit with good communication and all bring different elements to the game.

“The most exciting thing is we’re always getting better,” he adds.

Following the great exposure that goalball enjoyed during London 2012, is the sport now on the up in the UK? “I would say defiantly yes!” Says Dan. “2012 is what made me decide to compete so I don't know what it was like before but I have definitely seen growth.”

Goalball UK's Dawn Newbery adds, "We've been working hard to raise the profile of the sport. We know there are many potential athletes out there who are visually impaired and need to know a team sport like goalball exists."

One vital source of support for the game comes from SportsAid which thanks to its partners and fundraisers around the country has been able to invest almost £25,000 into its athletes since London 2012. Alongside Dan, three other members of the current British team – David Knott, Adam Knott and David Butler – have all benefited from this support recently and the fifth, Filmon Eyassu, may do as well this year if the charity can raise the funds he needs.

“The funding from SportsAid has been amazing.” Dan says. “If I didn't receive the funding I would have missed crucial training sessions. It makes it possible to keep healthy and progressing.

“The biggest challenge is that we all live so far apart and all being visually imparted can't drive to train as a team. The dream is a goalball centre where we could live and train.”

The charity needs your help to ensure talented athletes like Dan can continue receiving the support they rely on to succeed in sport.

To find out more about goalball, how it's played, its history and how to get involved visit Goalball UK's website. 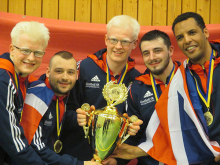